"Hurry up, Tr'lia!" LiLi sang over her shoulder as she hopped through the market's wide aisles. Her clawed feet stirred little puffs of dust as they scrabbled for purchase. "Come on!"

"I'm coming." Tr'lia sighed. She clutched the netted bundle of wares more tightly in her green wings and increased her pace. Her friend's feathered back bobbled between the rows of booths like a fat, blue cloud. Tr'lia smiled and suppressed a chuckle. Who could blame LiLi for being excited? "The festival doesn't start for two days, LiLi," she called. "We won't sell anything today."

"They're already shopping!" LiLi hopped higher and flapped her short wings for emphasis. She was hurtling forward again before she hit the ground. Her little fantail twitched, an arc of blue, as she landed and continued her hustle.

Tr'lia shifted the bundle's weight again and followed her friend. She flipped her own long tail feathers higher above the dust and kept after LiLi. Occasionally a shadow would pass over, the silhouette of some early shopper looking to see what the bazaar had to promise. Tr'lia wanted to see as much as they did, but LiLi would not be deterred. She tried in vain to catch a glimpse or two of the wares in the booths as they ran past.

The festival had come to their aerie at last. Her feathers ruffled at the thought. Flocks would be arriving from the farthest reaches of the desert to trade, to compete in the games, and to show off for one another. The plain below their cliff homes already teemed with the camps of visitors, strange visitors, and their wares already filled the makeshift booths of the bazaar.

LiLi put distance between them as Tr'lia's mind wandered from their task. The booths to either side of her demanded attention. She saw ropes twined from dried grasses, grasses that had been diligently cleared from the Flocks' territories to prevent the Plants gaining any purchase here. She saw carved stone bowls, bone utensils and armor crafted from the exoskeletons of the giant insect herds.

She saw the vendors. They perched above their goods in plumages of impossible variety, and Tr'lia wanted to see them all.

"Tr'lia!" LiLi chastised from far ahead.

"I'm coming." Tr'lia snapped. LiLi had no bundle to carry. Her wings were too short for much labor, and it fell upon Tr'lia to heft their year's work to the stall. "Don't get into a molt over it!"

The friends had worked all year together, trading babysitting and odd jobs for cast-off feathers. They'd spent long evenings twining and weaving and perfecting their crafts, all for today--all for the chance to be included in the festivities. LiLi was right to be in a hurry.

Tr'lia stood a dozen strides from their booth when she saw the pet vendor. LiLi perched over their tables, flapping at her and churning up clouds of dust, beckoning for her to get a move on. But the pet vendor's booth seemed more enticing and far more exotic. Tr'lia's scaled legs slowed. She cast an eye over the spread of mesh cages and listened to the buzz of wings inside.

She stopped. She shifted her netted bundle to one yellow hip and examined the little cages. Three bluebottle flies skittered around inside a small, mesh cylinder. Their exoskeletons gleamed iridescent below the continual buzzing of their translucent wings. Another case held an emerald beetle the size of Tr'lia's fist. It hissed and waved its long horn at her when she peered closer.

"Ho, HO!" a voice from above called. "A pet enthusiast, a connoisseur!"

Tr'lia looked to the perch above the stall. The crimson sky faded into peach as dawn spread over the market. The light cast a pink glow around the fat vendor that stared down at her. His feathers would have been lovely, had they been clean. Obviously not big on preening, their owner had let them fade into a mish-mash of dingy hues. Tr'lia identified reds, browns and purples through the grime.

"And a good morning to you, my dear!" The man shouted, and a crooked crest rose in an arc over his brow. "A little shopping, on a fine day, yes?"

"And so you are, so you are." The vendor launched from his perch so suddenly that Tr'lia took a step back. He landed in a plump plop behind his table-ring of pets.

He shook himself, ruffling his plumage and dislodging a small flurry of down in the process. "But these are lovely, no?" He pointed one long sharp tip feather at the three bluebottles.

"Yes! And quite unusual, no? Quite unique."

"I've seen some before," she said. "A traveling vendor brought some last winter."

"Oh NO!" The dirty man was taken aback. "Surely not like these," he protested.

The pet vendor just harrumphed at her and reached below the counter. He pulled out a tray of slender glass domes and set it down next to the flies. "And what about these?" Triumph and something of a dare shone in his black eyes. "I suppose you've seen these as well?"

"No--no." Tr'lia shook her head and stared at the domes. Her feet trembled and begged to back away from the stall. The feathers on her neck rose a little against her will. Inside each perfect glass container grew a bright green plant. Each shiny stem arched upwards, terminating in a bulbous, toothy green mouth. Sticky goo collected between the lips. "Where did, where did you get those?" she whispered.

"Ha Ho!" the man sang. His crest stood so high it nearly straightened. "You haven't seen these before."

"No," Tr'lia eyed the glass suspiciously, as if it might shatter at any moment and release the horrid things. "Aren't they dangerous?"

"Certainly so!" the vendor sang happily. "But for the brave, the skilled keeper, a true treat!" He reached under the counter again, and she braced herself for his next revelation. All he produced, however, was a stack of thin leaflets. He held one out to her, bobbing his head rapidly. The leaflet read: The Captive Care of Plant Species.

"Tr'lia!" She heard LiLi's voice, frantic and moving in their direction.

"No." Tr'lia shook her head, refusing the proffered leaflet. "I have to go." She twisted her head and looked over one shoulder. LiLi waddled across the dirt aisle and she looked far less than happy. If she saw the plants, well, Tr'lia didn't want to deal with an irate LiLi all afternoon. "Thank you," she told the old vendor without looking back in his direction. "Goodbye."

Next Episode
Posted by Frances Pauli at 4:52 PM 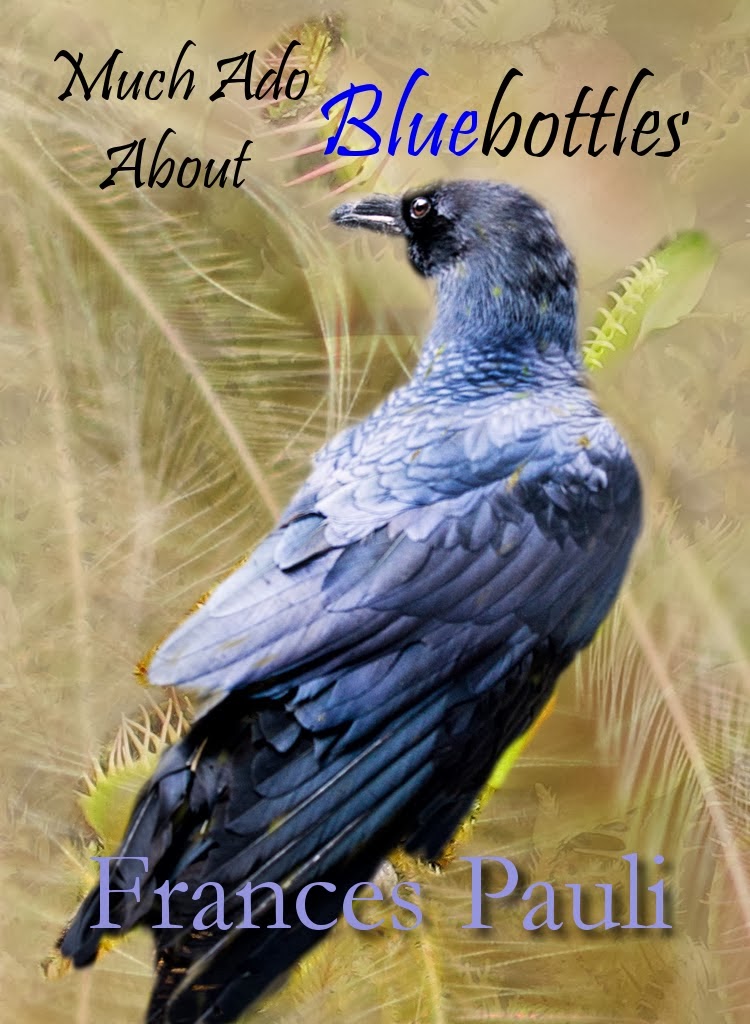 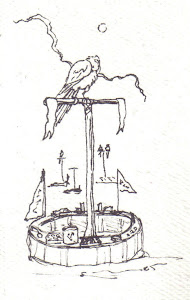 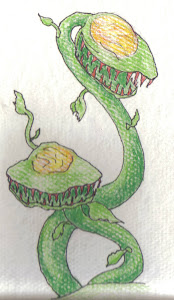 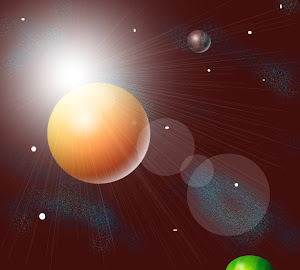